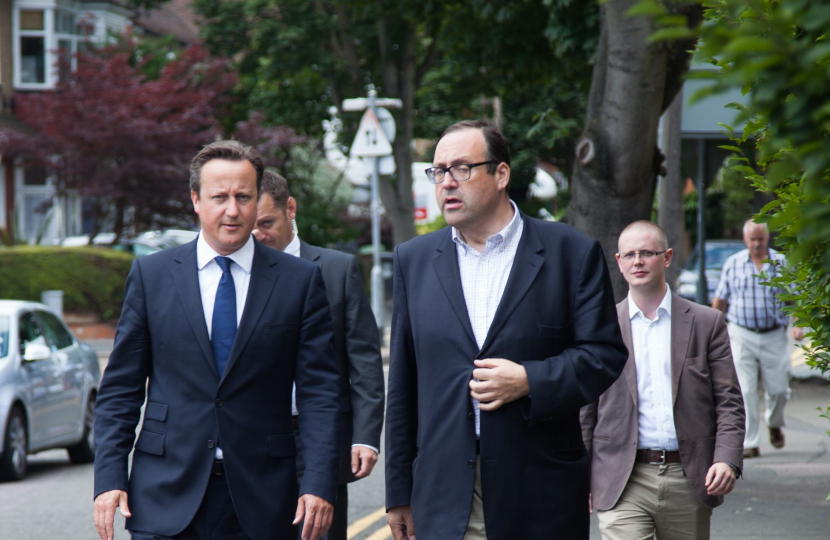 The Prime Minister today priased Watford as a top place to do business, and outlines measures to help small local economies, following a question raised by Richard Harrington MP.

Richard Harrington MP spoke in the House of Commons earlier today about how Watford continues to attract large companies such as Wickes, who have moved 200 jobs to premises in Watford this week. Watford has been named as a top town for growth nationally, and more large companies are expected to invest in Watford over the coming year thanks to improved transport links such as Croxley Rail Link which this Government has funded.

Richard went on to also raise his recent visit to Wenta Business Centre where he met a number of small businesses, including Pocketfit Training and AC Solutions both based at the site on Colne Way. Small businesses had said they would like to see less regulation and red tape, and more financial support to help them grow, both of which Richard asked the Prime Minister for support with today.

The Prime Minister responded saying how pleased he was to hear about the positive business environment in Watford, and that he was actively working to reduce red tape including scrapping thousands of pieces of legislation saving businesses millions of pounds every year already. Earlier this week it was announced that this Government would be the first in modern history to reduce overall regulation.

These comments supporting Watford as a top place to do business follow this mornings announcement of a new £415 million cash injection to back local economies, including knocking a further £1000 off the next tax bill for 300 000 small retail firms. This latest tax incentive to help business and cut employment is in addition to a previous announcement, the scrapping of employers national insurance contributions for under 21’s, which saw Chancellor George Osborne visit the new Morrison’s store in West Watford.

Richard added: “We know that Watford is going from strength to strength at the moment, with investment not just from the Government but also from a number of new companies both large and small. I am delighted that the Prime Minister is taking actions to further support businesses, and that these specifically address the points I have discussed with local people on recent weeks and months.

For any business listening today I hope they will see that Watford continues to be a top place to work and invest, and that the future is very bright. Unemployment has been consistently falling and is at its lowest for several years, and the economy is growing at its fastest rate since 2007. Indeed our local economy in Watford is expected to grow by more than £200 million in recent years as a direct result of Government investment such as Croxley Rail Link, and I will continue to do what I can to make sure Watford has the support it needs to grow. Things are being delivered, but there is more work to do”