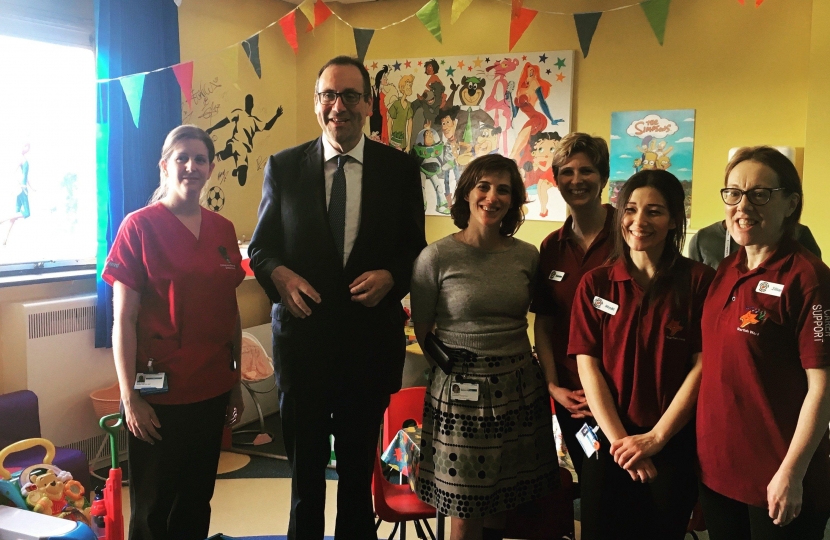 Richard Harrington MP has nominated the Carer Support Team at Watford General Hospital for an NHS Parliamentary Award in recognition of the fantastic work they do supporting over 5,500 carers every year.

The Carer Support Team are a group of volunteers who give up their time to support carers of children admitted to the ward/children's emergency. A volunteer may sit with a child while a carer showers, help a carer compile questions for the consultant, provide information about the hospital, organise a translator or signpost any resources.

Mr Harrington nominated the team for the ‘Volunteer of the Year’ award which celebrates volunteers who help shape and deliver better services in their area by donating their time and expertise to the NHS.

The NHS Parliamentary Awards were set up last year in celebration of the 70th birthday of the NHS. The 2019 awards will take place on Wednesday 10th July in the House of Commons, and all shortlisted nominees will be invited to attend.

“All of our brilliant NHS staff, volunteers and carers deserve recognition, but there are many that go above and beyond to make the NHS an even better service. Last year I was invited to meet the Carer Support Team at Watford General to learn more about how they support families during what can be a really difficult time. It was actually a local parent who told me about The Carer Support Team in the first instance, and they were so passionate about the difference those volunteers had made to their experience. That’s why I decided to nominate the team for a national award, in recognition of the invaluable care and support they provide families all year long.”

“Richard Harrington’s nomination of our team for an NHS Parliamentary Award means a great deal.  We work hard to support families when they have a child admitted to Starfish Children’s Ward or Children’s Emergency, and recognition for a job well done is wonderful.

On a more practical level, our team needs £10k to cover our costs for the upcoming year (we have raised £20k already), so hopefully this press will alert some Watford businesses to a good cause on their doorstep! The Carer Support Team is wholly reliant on community financing”.